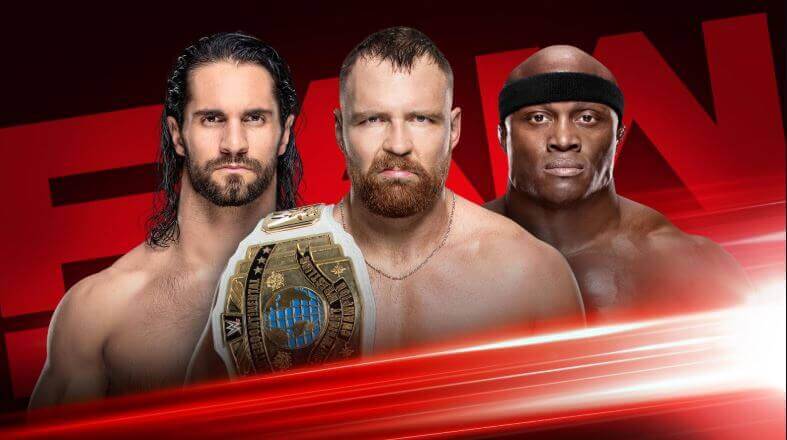 Preview:~ As Seth Rollins was moments away from reclaiming the Intercontinental Championship from Dean Ambrose in a Falls Count Anywhere main event, “The All Mighty” Bobby Lashley attacked The Kingslayer and drove him through a table. Following that bout’s controversial conclusion, the McMahon family has scheduled an Intercontinental Championship Triple Threat Match for Raw, pitting WWE’s self-proclaimed “Moral Compass” against The Architect and “The All Mighty One.”

Rollins will once again have a chance to reclaim Team Red’s workhorse title, but he’ll need to battle Threat Match. Who will walk into the Royal Rumble event as Intercontinental Champion

As their title bout looms, Banks and Rousey must join forces to face Jax and Tamina in tag team action on Raw. Can they coexist given what awaits on Jan. 27 in Phoenix?

The Monster Among Men came to Raw this past Monday night to throw down with The Beast Incarnate, but Lesnar refused to give Strowman or the WWE Universe the fight they wanted.

Following two controversial defeats in so many weeks, The Revival claim there’s a conspiracy against them and, really, can you blame them?

Who else will declare for a Royal Rumble Match, where a title opportunity at WrestleMania will be earned through grit, determination and no small amount of stamina?

MEMPHIS — Braun Strowman is out of the Universal Championship Match at the Royal Rumble pay-per-view.

The dramatic shift in The Monster Among Men’s fortunes came after a tumultuous start to Raw that saw him go from promising victory against Brock Lesnar to chasing Baron Corbin throughout the backstage area when The Lone Wolf questioned Strowman’s chances against The Beast. Strowman found his prey holed up in a limousine in the loading dock (Elias provided the key tip-off in song) and tore the door off the limo with his bare hands to smoke out The Lone Wolf, only to find himself face-to-face with the vehicle’s intended passenger, and the only man who could possibly intimidate Strowman more than Lesnar: Mr. McMahon.

The Chairman was, obviously, less than pleased that The Gift of Destruction had decimated his ride. Furious, really, is a more apt description. So much so that he levied a $100,000 fine against Strowman. That might have been that, but when The Monster Among Men raised his voice, The Chairman upped the ante by calling off the Universal Title Match and walking away. Braun replied by flipping over Mr. McMahon’s limo in frustration, an impressive display that doesn’t hide the fact that Strowman let his long-awaited opportunity slipped right through These Hands. And with the most monstrous player off the board, the Universal Title field is wide open.

Good enemies make better allies, but nobody should get the idea that Ronda Rousey’s team-up with her challenger Sasha Banks was anything but a partnership of convenience. As crisp as both were against Nia Jax & Tamina in the first match of this week’s Raw, things went from civil to tense in a hurry during a post-match interview. Following the victory — via Bank Statement over Tamina — Rousey got a little ahead of herself in the process of praising The Boss by predicting that her inevitable victory will rank among her greatest accomplishments.

Sasha, obviously, took exception to being overlooked, and Rousey’s attempts to cool the situation down only led to a backstage confrontation between the two that Bayley and Natalya narrowly managed to defuse in the backstage area — though they quickly ended up at odds over which Superstar was the instigating party. The Riott Squad, who never met a button they didn’t like to push, showed up to push some buttons and “take a bad situation and make it worse” by challenging Bayley and Natalya to a match later in the night … provided they found a friend to join them.

Last week, The Revival were surrounded by a ring full of Lumberjacks, none of whom managed to alert the referee that Scott Dawson’s foot was on the ropes during the fateful pinfall that cost them a chance to win the Raw Tag Team Titles. So the “Top Guys” came to Raw in search of some retribution against three of those Lumberjacks, a team with which they have unfinished business: The Lucha House Party.

Braun Strowman is out as Brock Lesnar’s next challenger. So, in the immortal words of a former Universal Champion: Who’s next?

But that wasn’t all: After The Chairman made his exit, he bumped into Jinder Mahal backstage, and The Maharaja made a last-ditch case for himself as a challenger for Lesnar that landed on sympathetic ears. Mr. McMahon agreed that if Mahal defeated one of the competitors in the Fatal 4-Way in a singles match tonight, he would take that man’s place. The former WWE Champion made his decision on the spot: He chose Finn Bálor.

Hello, Nikki Cross. For now, anyway. The Twisted Sister of NXT officially became the first member of the black-and-yellow brand’s newest class to rear her head on Monday Night Raw, teaming with Bayley & Natalya in a winning effort against The Riott Squad. Whether Team Red is the she-demon’s permanent home, however, is another matter entirely, as the six NXT veterans will be appearing on both shows until they are assigned to a specific brand.

Finn Bálor def. Jinder Mahal to keep him out of the Fatal 4-Way to determine Brock Lesnar’s challenger

Jinder Mahal, challenge Brock Lesnar? It’s been a while since The Maharaja sniffed a World Title, but as he pointed out to Mr. McMahon, he’s as deserving as anyone of an opportunity. After all, he is a former WWE Champion, and he was about a minute away from facing The Beast in 2017 before AJ Styles swooped in and stole his glory.

Bobby Lashley made a point of marking the amount of time since he’d held WWE gold on Twitter over the weekend. The All Mighty can stop the clock now. Following a power play on last week’s Raw that thrust him into the Intercontinental Title picture, Lashley finally broke his championship drought by winning a Triple Threat Match against Dean Ambrose and Seth Rollins to win the ivory title for the first time in his career.