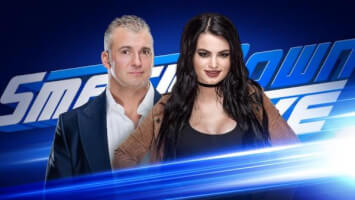 * Survivor Series, the one night each year when SmackDown and Raw face off in head-to-head competition, is almost here, and the lineups for each brand’s teams are beginning to take shape.
Last night, Raw revealed that Braun Strowman, Dolph Ziggler and Drew McIntyre would be heading into battle while Acting Raw GM Baron Corbin takes on a managerial role on Nov. 18 on the men’s side, while Alexa Bliss will captain the women’s squad.
How will Team Blue respond? We know that Paige has offered Charlotte Flair the captaincy for the women’s team, but The Queen turned her down. Will she reconsider? How will SmackDown LIVE’s men’s team begin to form?

* Last night on Raw, Ronda Rousey responded to SmackDown Women’s Champion Becky Lynch by reminding her exactly who she is two weeks before their Champion vs. Champion battle at Survivor Series. The Raw Women’s Champion welcomed Lynch’s aggression, telling The Irish Lass Kicker to bring all her anger to Los Angeles.
How will “The Man” respond to being called out by The Baddest Woman on the Planet?

* Shockwaves were sent through the WWE Universe last Friday when Shane McMahon replaced an injured Miz in the final of the WWE World Cup Tournament and defeated Dolph Ziggler to become the best in the world.
After threatening the jobs of The A-Lister, Randy Orton, Rey Mysterio and Jeff Hardy ahead of the tournament, how will the Commissioner’s unique use of his power sit with the rest of Team Blue?

* When Brock Lesnar captured the vacant Universal Championship last week, a huge Raw vs. SmackDown rematch was set for Survivor Series – a battle with WWE Champion AJ Styles.
The Phenomenal One pushed The Beast to his limit last November before falling to Lesnar. How will the WWE Champion alter his game plan for this highly anticipated rematch? Find out tonight on SmackDown LIVE at 8/7 C on USA Network!