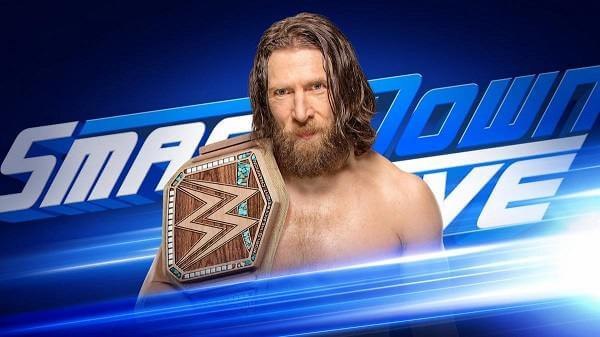 Preview : Despite facing seemingly insurmountable odds inside the unforgiving Elimination Chamber, WWE Champion “The New” Daniel Bryan survived the brutal match, dashing Kofi Kingston’s dreams and retaining his eco-friendly title. As The Road to WrestleMania heats up, the “Planet’s Champion” must look ahead to WWE Fastlane. Tonight, Bryan will find out his opponent for the March 10 WWE Network spectacular. Who will it be? Find out tonight on SmackDown LIVE at 8/7 C on USA Network!

Live Update Of ResuLts Is Here By Yog Mac.

With SmackDown Women’s Champion Asuka clamoring for a new challenge, Mandy Rose heeded the call, saying that Asuka, who some say has been lost in the shuffle as of late, could learn something from her about how to stand out.

Following his incredibly impressive showing against Elias last night on Raw, former NXT Champion Aleister Black made his SmackDown LIVE debut against a Superstar with whom he shares considerable history from their time in the black-and-yellow brand: Andrade.

After their surprising SmackDown Tag Team Championship defeat at the hands of The Usos this past Sunday at WWE Elimination Chamber, things got real between Shane McMahon & The Miz here on SmackDown LIVE.

Despite facing five determined competitors inside one of the most unforgiving structures in sports-entertainment history, “The New” Daniel Bryan overcame the odds to retain his eco-friendly WWE Championship.

After taking the fall that cost The Co-Besties the SmackDown Tag Team Championship on Sunday, The Miz, at first, was apologetic to Shane McMahon. Later on in the evening, though, The A-Lister seemingly couldn’t contain his anger at himself, even as Shane-O-Mac told him not to worry about it.

Charlotte Flair expected to get an up-close look at her WrestleMania opponent, Raw Women’s Champion Ronda Rousey at WWE Elimination Chamber on Sunday. She did get that, as she witnessed Rousey dismantle Ruby Riott to retain her title. The Queen also got battered with a crutch by the suspended Becky Lynch. She probably wasn’t expecting that.

After an incredible hour-long performance in last week’s Gauntlet Match, Kofi Kingston nearly went the distance at WWE Elimination Chamber. The veteran New Day member came within an eyelash of dethroning Daniel Bryan to capture the WWE Championship, but a high-risk splash from atop one of the pods did not go his way, leading to Bryan hanging onto the hempen title.