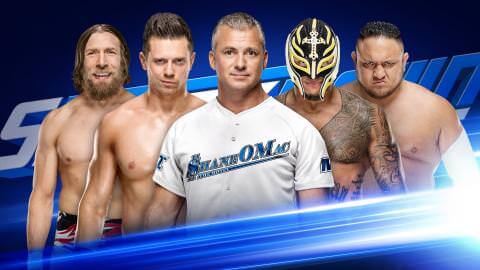 WWE SmackDown 11/13/18 November 13 2018 Preview: Will Raw respond to Team Blue’s Becky Lynch-led invasion? Becky Lynch heard Ronda Rousey’s words loud and clear Monday night, and retaliated on the spot. The SmackDown Women’s Champion led the women of Team Blue on a surprise invasion of Raw, that saw “The Man” bash Rousey with a steel chair ahead of their Champion vs. Champion Match this Sunday at Survivor Series.

Monday night, Becky Lynch led Team Blue’s women in a surprise invasion of Raw that ended with The Man blasting Raw Women’s Champion Ronda Rousey with a steel chair, standing tall and declaring that Raw was “her show.”
Now that the battle lines have been drawn in the struggle for brand supremacy, how will Raw respond? Will they be out for retribution just five nights before Survivor Series?

The SmackDown Men’s Survivor Series team was set last week, with co-captains Daniel Bryan & The Miz adding Commissioner Shane McMahon, Rey Mysterio & Samoa Joe to their squad, but turmoil among the team at the end of last week’s show has the WWE Universe wondering if they’ll present a united front this Sunday against Raw.
Can the members of Team SmackDown put their differences aside?

SmackDown LIVE General Manager Paige revealed her team for the Women’s Survivor Series Elimination Match last week, choosing Asuka, Naomi, Carmella and Sonya Deville as part of the team that will square off against Alexa Bliss’ Raw crew on Sunday.
Missing from the lineup was Charlotte Flair, who Paige wants on the team as the captain. However, The Queen rebuffed Paige’s offer several weeks ago and was nowhere to be found when announced last Tuesday. Will Charlotte take her place on Team Blue this week?

Jimmy & Jey Uso emerged victorious over The New Day last week to earn the right to captain SmackDown’s Tag Team Survivor Series squad, then picked Kofi Kingston, Big E & Xavier Woods to join them on Team Blue.
Who will join these two tandems to take on Raw’s squad this Sunday? Find out tonight on SmackDown LIVE at 8/7 C on USA Network!