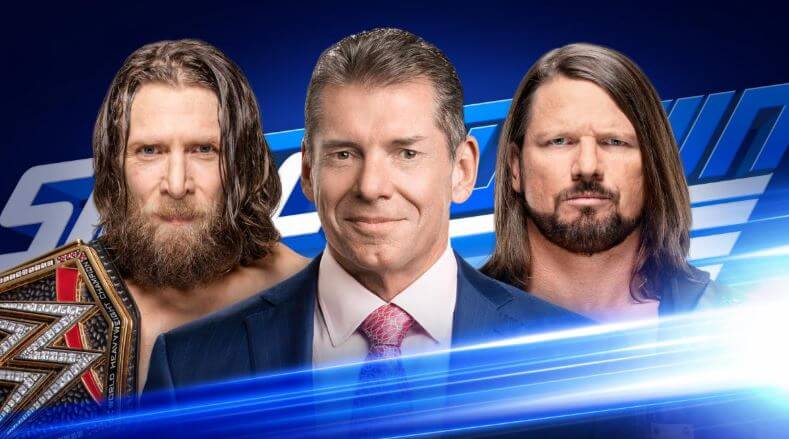 The rivalry between Rey Mysterio and Andrade has taken the WWE Universe by storm over the past few weeks, with the latest chapter being written in a classic showdown won by the young upstart, thanks to an assist from Zelina Vega. The epic struggle for supremacy between the Superstars continues tonight, when the two clash in a 2-out-of-3 Falls Match. Who will stand tall after what is sure to be a grueling battle? Find out tonight on SmackDown LIVE at 8/7 C on USA Network!

Tensions between WWE Champion “The New” Daniel Bryan and AJ Styles have continued to escalate over the past several weeks, and now, with their WWE Title Match in sight, the two will meet face-to-face tonight with Mr. McMahon moderating.

In a match that had the entire WWE Universe captivated, Andrade was able to best Rey Mysterio in a thriller last week on SmackDown LIVE after Zelina Vega got involved. Now, the two Superstars are going to run it back in a match that will go a long way in proving who the better man is when they face off in a 2-out-of-3 Falls Match tonight on the blue brand.

Will Mysterio get the leg up on Andrade this time around? Or, will the surging Andrade take down The Greatest Mask of All Time again, seizing pivotal Royal Rumble momentum in the process?

Following the chaotic scene last week that saw The Miz and Sheamus’ one-on-one match conclude with both The Celtic Warrior and Cesaro being covered in cake, The A-Lister and Swiss Superman will battle just five nights before the Royal Rumble SmackDown Tag Team Championship clash between the two units.

Naomi and Mandy Rose to square off

Mandy Rose sunk to new lows to embarrass Naomi last week on SmackDown LIVE, persuading both Naomi and her husband Jimmy Uso to a hotel room in a plan that ultimately resulted in Naomi being downed by The Golden Goddess, who escaped.