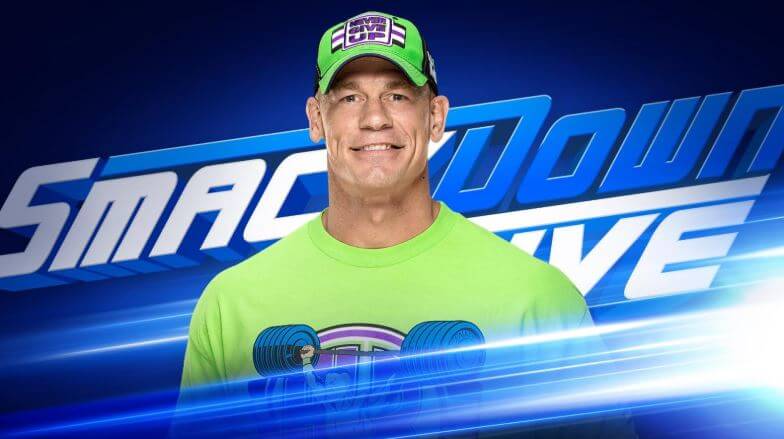 Preview :What better way to kick off 2019 than with the return of John Cena? What does the 16-time World Champion have planned for the blue brand? Find out on the first SmackDown LIVE of the new year, tonight at 8/7 C on USA Network!

The New Day kicked off 2019 with a New Year Celebration

The New Day kicked off 2019 the right way on SmackDown LIVE – with pancakes!

Kofi Kingston, Xavier Woods and Big E, the last of whom was dressed as the most muscular New Year’s Baby ever, also dropped a huge announcement – they’ll all be entering the 2019 Royal Rumble Match! After doing a little Steiner Math (it’s complicated), The New Day surmised that they’ll have the best odds of winning and heading to WrestleMania.

The trio then revealed their new year’s resolution – to stop eating pancakes. Before the horrors of The New Day tossing out heads of lettuce soaked in balsamic vinaigrette to the WWE Universe could become reality, however, they ditched that plan because nobody really keeps their resolutions, right?

But after all the celebrating, there was business to get to. Namely, determining the final participant in tonight’s Fatal 5-Way to determine who will challenge WWE Champion Daniel Bryan at Royal Rumble. Who (Who? Who?) would it be? Jeff Hardy or Samoa Joe? We wouldn’t have to wait long to find out.

After last week’s brawl that ended with Samoa Joe putting Jeff Hardy to sleep with the Coquina Clutch, these two rivals squared off once again, this time with higher stakes – the opportunity to compete for a WWE Championship Match later tonight.

The bout was just as heated as their Christmas showdown, with Joe looking to submit Hardy early and The Charismatic Enigma seeking to unleash his rage on the submission expert. Despite being on the receiving end of some heavy-duty shots from Joe, Hardy still landed a Swanton Bomb.

However, Joe rolled to the arena floor after the move connected, drawing Hardy to ringside, as well. Joe trapped The Charismatic Enigma in the Coquina Clutch and nearly won the battle by count-out. Hardy beat the referee’s count, but Joe once again locked his foe in the clutch, and Hardy passed out in the hold.

Joe had one win out of the way. Could he pick up the second later in the night and get a WWE Championship Match?

It was looking to be another Happy Rusev Day on Jan. 1, as The Bulgarian Brute declared that he would take great pride in being United States Champion and that his reign would be long and luscious (like his beard).

Rusev pledged allegiance to the star-spangled title, but the “Rusev Day, USA!” chants were cut short when Shinsuke Nakamura attacked him from behind. Lana came to her husband’s aid, jumping on The Artist’s back to stop the attack. Rusev got back to his feet and clobbered Nakamura with a Machka kick, but The King of Strong Style fell backward, landing on top of Lana. The melee temporarily stopped as Rusev checked on his wife, but the relentless Nakamura pounced on the United States Champion and floored him with a Kinshasa.

After Mandy Rose attempted to get Jimmy Uso under the mistletoe on Christmas night, Naomi was more than ready to get her hands on The Golden Goddess tonight. However, Mandy had more tricks up her sleeve, including donning a custom Usos t-shirt to infuriate Naomi. This allowed Naomi’s actual opponent, Sonya Deville, to slide into the ring.

Naomi was ready to throw hands, regardless of the opponent, and took the fight right to Deville. But just when Naomi was about to take control of the battle, Rose grabbed the microphone and revealed a racy photo she had sent Jimmy earlier in the day. With Naomi blinded by rage, Deville took advantage by planting Naomi into the canvas with a devastating slam to pick up the victory.

Carrying a custom towel gifted to him by Ellen DeGeneres that read “Be kind to one another,” John Cena returned to the blue brand for the first time in nearly a year. The 16-time World Champion reflected on the ups and downs of his 2018, but he revealed that he wasn’t quite sure why he was back on Team Blue. However, he was positive that “any man” would soon be waltzing down to the ring to call him out.

It wasn’t just any man, though. The Man came around.

Lynch brazenly declared that her goal wasn’t only to displace Charlotte Flair on posters – she wanted Cena’s spot too. And if Cena had a problem with that, The Man warned The Cenation Leader that Nikki Bella wouldn’t be the only woman to drop him this year.

Before Cena could respond, however, Andrade “Cien” Almas & Zelina Vega arrived to run down the two Superstars, calling Cena an “old face” and Lynch a “broken face.” After the insults were out of the way, Cena issued a challenge: Almas & Vega vs. Cena and Lynch, right now!

The McMahon Family signed off on this mixed tag team bout during the commercial break, setting up a huge first-time-ever battle.

The Man was ready to take on Andrade after she sent Vega retreating to her corner to tag “Cien,” but the rules of the match dictate Cena’s entrance into the bout, which Lynch made official with a hard tag to the 16-time World Champion’s chest.

Vega distracted Cena, allowing Almas to go on offense against The Cenation Leader. “Cien” unleashed a flurry of high-flying attacks on Cena, with Vega doing her part behind the referee’s back. But Cena evaded Almas’ trademark double knees and put The Man back into battle.

Lynch hurled Vega around the ring with ease, nearly picking up the victory. And when Almas jumped back into the ring to save Vega from the Dis-arm-her, Cena was waiting to cut him off with the Attitude Adjustment and the devastating Lightning Fist. But before Cena could get the pin, The Man shoved him out of the ring and locked the Dis-arm-her on Vega to get the tapout victory.

After the bell, John Cena offered a handshake to Lynch, but The Man was defiant in victory, offering four words to the 16-time World Champion: “You can’t see me!”

What better way to kick off the new year than with John Cena?
Cena’s first appearance will come on the New Year’s Day edition of SmackDown LIVE. As Team Blue gets ready to kick off 2019, how will the presence of one of the greatest Superstars in WWE history effect things?

It wouldn’t be New Year’s Day with out a celebration. Thankfully, The New Day is here to throw a party worthy of 2019.

There’s sure to be plenty of pancakes at The New Day’s New Year Celebration, but what else will Kofi Kingston, Xavier Woods & Big E have planned for the WWE Universe?

On Christmas night, Mr. McMahon demanded to see the animal inside AJ Styles, wanting to know who the “real” AJ Styels is. Mr. McMahon went so far as to slap The Phenomenal One after questioning why Styles was letting others compete in the house he built.

The Miz made an impassioned plea to Shane McMahon on a Christmas night edition of “Miz TV,” one last time asking Shane-O-Mac to join forces with him to be come “the best tag team in the world.”

Last week was a Merry Christmas and the happiest Rusev Day, as The Bulgarian Brute defeated Shinsuke Nakamura to win the United States Championship.
Find out on the first SmackDown LIVE of 2019, tonight at 8/7 C on USA Network! : 1/1/19.